Have you heard of these phone scams aimed at kids?

ParentShield Network urges vigilance to parents after these phone scams aimed at kids have become rife. 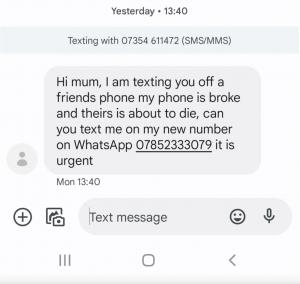 We have seen scam SMS messages of all types double in frequency of the last 12 months. What is particularly concerning are the messages specifically targeting parents concerned for their child.”

Over the last 12 months, ParentShield reports it has intercepted and blocked twice as many text scam attempts as the previous 12 months, and is issuing a warning to parents who may be considering a first mobile phone for their children this Christmas.

Scammers are becoming more sophisticated, which means that their SMS messages look ever more genuine. This is worrying enough when the recipient is an adult, but when it’s a child, infinitely more so. There has been a particular rise, says the Network, in SMS messages particularly aimed at children with a target of defrauding parents. These scams leverage the emotional concern and urgency to protect children to overshadow any doubt over legitimacy.

With Christmas coming up – and many children getting mobile phones for the very first time, now is the time to raise awareness and talk to children, and share examples of scam messages between all family and friends. By using a suitable service, argues the network, it is also possible and advisable to completely block all SMS from unknown senders.

The ‘broken phone scam’ is a phishing text message aimed at ‘mums’. The personalisation of a message by using a recipient’s name increases it’s ability to suck a victim in exponentially. As they have no way of knowing who they are texting, generic names, such as ‘mum’ or ‘dad’ etc would land on far more than ‘Gary, Sarah etc. The way they use the love a mother has for their child, to extort them, is sickening.

They work one the hope that the mother they happen to land on panics and follows the instructions, only to be told that money needs to be transferred.

The scam message can be sent from a spoofed number so as to look familiar to the recipient, or even exactly match a known number so vigilence is always required, says the Network.

You may also enjoy:

How to encourage kids …